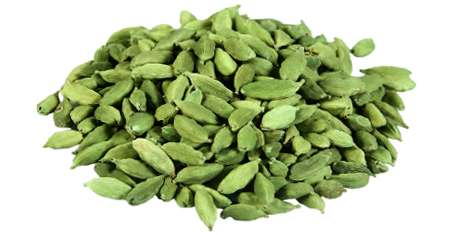 Cardamom (Elettaria cardamom), known as the “Queen of Spices” is a perennial herbaceous plant with a pseudo stem and thick irregular shaped rhizomes. Cardamom is among the most popular aromatic herbs used today, with the seeds adding a uniquely sweet quality to many popular commercial beverages and other products.

What Is Small Green Cardamom? 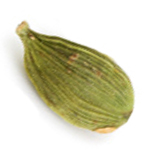 Cardamom or “Grains of Paradise" (Elettaria cardamomum) is one of the world’s very ancient and an expensive spice is also one of the primary constituents of Garam Masala. Botanically, it belongs to the family of "Zingiberaceae" and consists of two genera; Elettaria and Amomum.

Both Elettaria and Amomum cardamom types feature three-sided pods with a thin, yet tough papery outer cover. Inside, tiny, deep-brown to black, aromatic seeds are arranged in vertical rows with each grain ensheathed again inside a very thin membrane.

Elettaria pods are small and light green, while amomum pods are larger and dark brown. The pods are being used as flavoring base in both food and drink as well as in medicine. 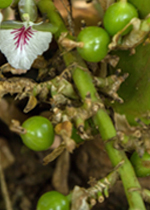 Elettaria cardamomum is native to tropic regions, and can grow to heights of 10' or more, with the tall stems showing long, alternate leaves. Cardamom is native to tropical regions, and should only be grown outdoors in hardiness zones 10-13, where minimum temperatures approximately 35 degrees or higher. It can be grown with care indoors or in a greeenhouse in zones 9 and lower, or overwintered carefully if grown in a large, deep container that can be moved indoors as needed. Cardamom tree can reach heights of ten feet or more by the third year. Cardamom prefers a rich, loamy, slightly acidic soil with a pH approximately 6.1-6.6. For best results, fertilize or amend soil with minerals phosphorus and potassium.

To sow, the smaller seeds should be sown in a light but rich starting medium buried shallowly beneath the surface of the soil (approximately 1/8"). Cardamom requires a steady supply of moisture and will not tolerate drought. If growing in a greenhouse, it should be kept humid and maintained carefully. Cardamom is not tolerant of cold, but should be kept in a location with many hours of partially occluded sunlight. Cardamom required well drained deep loamy and loamy clay soils with high organic matter (>5%) with good litter mulch are preferable. Elevation must be over 600M amsl. Hilly areas of wet zones of up country and mid country are most preferable. Rain fall should be well distributed between 1500 – 2500mm per annum. Water logged or eroded soils are not suitable. Soil pH ranged from 4.5 to 6.0.

Nearly 60% shade is essential factor for cardamom. Hence it is commonly grown under natural forest cover. Planting material Cardamom can be propagated both through suckers and seedlings. But suckers are better and commonly used. Suckers in 6-10 cm length with a piece of rhizome of about 8-10cm long are used and they should be dipped in a copper base fungicide before planting to protect from fungal disease. 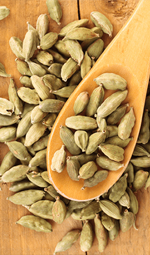 As a member of the ginger family, cardamom grows perennially and produces vast, fleshy root structures known as rhizomes. It has large leaves, green and white flowers, an edible but slightly bitter fruit, and large seeds. The seeds of the cardamom plant contain a variety of important minerals such as calcium, sulfur, and phosphorus. They also contain volatile oil composed of acetic and formic acids. This volatile oil, which makes up about 5 percent of the seed’s mass, has aromatic and medicinal properties, and it is what makes cardamom so valuable. Cardamom is found in the form of a small pod with black seeds inside. Both the seeds and the pod give a pleasant aroma and flavor. Therefore, they are used as flavoring agents in Indian cuisine. Its use is just not just limited to hot and spicy dishes; the seeds are also added to desserts and beverages to complement the sweet flavor.

Cardamom is well known as a spice used in Indian cooking, and is one of the primary constituents of Garam Masala. Cardamom are used as flavorings and cooking spices in both food and drink, and as a medicine. E. cardamomum (green cardamom) is used as a spice, a masticatory, and in medicine; Cardamom is also smoked for its unique aroma. Cardamom is considered one of the most valuable spices in the world due to its rich aroma and therapeutic properties.

1- Anti-Carcinogenic Properties – Studies conducted have shown that dietary cardamom had a positive result in counteracting colorectal cancer to an extent of 48%. Cancer, particularly colorectal cancer, is one of the leading causes of death around the world. The rising cost of conventional cancer therapy and the subsequent side effects have encouraged researchers to look for alternatives that are sustainable.

2- Hypertension – For those of you who suffer from hypertension, its time you consume cardamom on a regular basis as this spice has the capability of improving blood circulation to the lungs. This helps in reducing your blood pressure.

3- Asthma – Cardamom is considered to be highly beneficial for asthma patients. It also acts as a natural remedy for whooping cough and bronchitis.

4- Pathogens – People having infections are suggested to consume cardamom which is known to prevent infections due to its therapeutic properties. The various essential oils in cardamom inhibit the growth of bacteria, viruses, mold and fungus.

5- Hiccups – Cardamom is an antispasmodic spice which can help you in getting rid of hiccups. It provides relief from involuntary muscle spasms, like intestinal and stomach cramps.

6- Therapeutic Properties – Cardamom can be mixed into skincare products for antiseptic and anti-inflammatory purposes to calm and soothe the skin, thanks to its therapeutic effects. When added to perfumes, it can stimulate the senses. Facial soaps use cardamom to impart a warming sensation on the skin. These cosmetics using cardamom for therapeutic reasons are known as aromatherapy products.

7- Good for Cardiovascular Health – Cardamom administration for cardiovascular conditions resulted in a lower heartbeat or controlled rhythm, and control of hypertension.

8- Treating Urinary Disorders – In Ayurveda, cardamom has been used as a remedy for urinary tract diseases and infections such as cystitis, nephritis, and gonorrhea.

9- Control of Cholesterol – The micronutrients found in cardamom can counteract the surge of lipids in the body. The antioxidant enzymes had an influence on the cholesterol levels and helped in significantly controlling them.

10- Antimicrobial Properties – Cardamom contains antimicrobial properties. It was observed that the oils from cardamom were able to inhibit the growth and spread of some of the very dangerous microbes that regularly cause food poisoning. 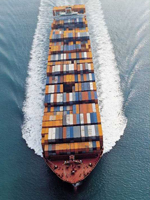 Consumption of cardamom has sharply increased throughout the world during the last two decades. The major consuming countries of cardamom are the Middle Eastern countries, India, Pakistan, European countries, the US, and Japan. Middle Eastern countries such as Saudi Arabia and the United Arab Emirates, and South-East Asian countries such as India, etc. 60% of the world production is exported to Arab (South West Asia, North Africa) countries, where the larger part is used to prepare coffee. Saudi Arabia is the single largest importer of Cardamom in the world, followed by Kuwait. The list of countries / territories that are the major importers is as follows: Saudi Arabia ,Kuwait ,UAE ,USA ,Japan ,Pakistan ,U.K ,Malaysia ,Israel ,Australia ,Canada and South Africa.

Recipe for Beverages with Cardamom 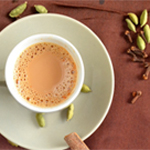 A: Put about seven cups of fresh cold water in a large saucepan.
B: Lightly smash the cardamoms in a pestle and mortar. Add to the water.
C: Bring to the boil.
D: When boiling, add the teabags and sugar.
E: Add enough milk to turn it a pale beige colour.
F:Bring to the boil again and just as it is rising to the top of the pan, switch off the heat.
G: Pour through a strainer.

Recipe for Cooking With Cardamom 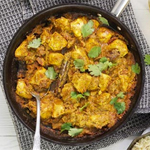 A: Place the garlic, ginger, chillies and coriander stalks in the small bowl of a food processor with a good pinch of salt, and blend to a fine paste – or grind to a paste using a pestle and mortar.

B: Heat 2 tbsp of the ghee or oil in a large pan, add the onions and cook slowly for 15-20 mins until golden and caramelised. Tip in the garlic-ginger paste, turn up the heat and cook for a further 5 mins. Add the ground spices and cook for 2 mins more until fragrant. Scoop the spicy onion mixture out of the pan into a bowl.

C: Add the remaining ghee or oil to the pan and cook the chicken over a medium-high heat until browned all over. Tip into a bowl, cover and set aside.

D: Return the onion mixture to the pan along with the whole spices, tomatoes and a can full of water (400ml). Bring to the boil, then cover and simmer gently for 40 mins.

E: Return the chicken to the pan and cook, uncovered, for a further 10 mins until the sauce has thickened and the chicken is cooked through. Stir in the yogurt and cream, season well and scatter with coriander leaves. Serve with chapatis and rice.

Recipe for Dessert With Cardamom 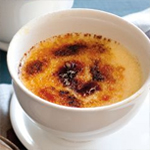 A: Preheat an oven to 325°F. Select a baking dish 2 to 2 1/2 inches deep and large enough to hold four 3/4-cup ramekins or other ovenproof dishes. Line the baking dish with a thin kitchen towel.

B: In a saucepan over medium heat, combine the cream, vanilla bean, and cardamom pods and their seeds. Bring to a simmer and cook for 1 minute. Remove the vanilla bean and, using the tip of a knife, scrape the seeds into the cream. Continue to simmer the cream, stirring often, for 3 to 4 minutes more. Remove from the heat and let cool slightly.

C: In a bowl, whisk together the egg yolks, 6 Tbs. of the sugar and the salt until thickened, about 2 minutes. Slowly add the warm (not hot) cream mixture, whisking constantly. Pour the custard through a fine-mesh sieve into a 2-cup measuring pitcher. Skim any bubbles off the surface. Divide the custard evenly among the prepared ramekins. Place the ramekins in the towel-lined dish and pour hot water into the dish to reach halfway up the sides of the ramekins. Cover the dish loosely with aluminum foil.

D: Bake the custards until they are set but jiggle slightly in the center when shaken, 20 to 25 minutes. Transfer the baking dish to a wire rack and let the custards cool slightly, then lift the ramekins out of the water bath and set on the rack to cool for 1 hour. Cover tightly and refrigerate for at least 3 hours or up to overnight.

E: Just before serving, preheat a broiler. Sprinkle each custard evenly with 1 Tbs. of the remaining sugar. Place the custards on a rimmed baking sheet and slide under the broiler about 4 inches from the heat source. Broil just until the sugar caramelizes, 1 to 2 minutes. Alternatively, use a kitchen torch to caramelize the sugar. Serve immediately.